The projects are part of a $285 million voter-approved bond package that will help the district cope with nearly 1,000 new high school students between 2018 and 2027, according to estimates from Sheldon ISD’s demographic report. The buildings are located a few miles south of Generation Park, near the intersection of Beltway 8 and Garrett Road.

“The primary goals were — first of all we’re considered a fast-growth school district — and that’s a response to it,” said Superintendent King Davis. “We were just out growing our capacity at our high school. Also, we were experiencing a great deal of growth at our elementary campuses.”

Sheldon ISD’s new $146 million CE King High School will debut to about 3,000 students in January. However, the school is expected to nearly reach its capacity of 3,500 by 2027, according to the demographics study, which was carried out by Population and Survey Analysts.

The school will have a lot of natural lighting, collaboration spaces and an emphasis on classrooms designed for career training in fields such as auto mechanics or cosmetology, said JP Grom, Vice President and Business Group Director for Lockwood, Andrews & Newnam, Inc. Lan, Inc. serves as program manager of the bond. 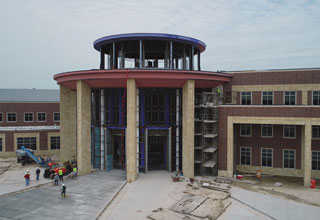