When the City of Friendswood, a suburban area of Houston, began replacing or rehabilitating several large sanitary sewer lift stations, there seemed to be an obvious decision for the largest lift station, named Crazyhorse. This lift station is the largest in the city’s collection system and directly feeds its 9.25 million gallons per day (MGD) wastewater treatment plant. The Crazyhorse lift station is also surrounded by several multimillion-dollar homes. Due to the importance and location of the submersible lift station, the city’s engineering and operations staff kept a watchful eye on the facility. As the lift station aged, it became apparent that a solution was necessary. The lift station’s electrical control building, wet well, overhead crane, and emergency power generator were all at the end of their useful life. The facility’s age, combined with unacceptable backups during heavy rainfall events, pushed the city into action. 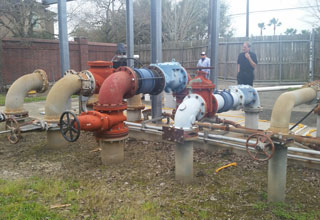