In the 2000s, the district’s aging system started to deteriorate, leading to sanitary sewer overflows (SSOs). Subsequently, the Authority decided to address this issue and entered into a multi-year sanitary sewer overflow initiative with the Texas Commission on Environmental Quality (TCEQ). In 2009, CLCWA hired Lockwood, Andrews & Newnam Inc. (LAN), a national planning, engineering and program management firm, as district engineer to evaluate and rehabilitate its sanitary sewer system.

“The system was originally built in the 1960s and the region has also grown rapidly in the last few decades,” said Bill Rosenbaum, P.E., LAN vice president. “These two factors put a lot of stress on the system. At its worst, there were more than 30 SSOs a year.” 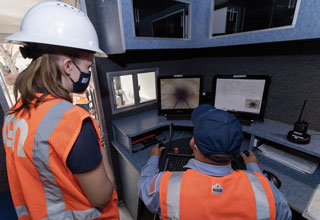