Classes start Aug. 19, but they will be online only for at least the first four weeks, according to Stafford MSD’s website.

The school will be able to accommodate 950 students in grades six through eight. The full building will be 139,360 square feet over three stories. It will include science laboratories, robotics facilities, engineering and computer labs, a band room, two art rooms, a fitness room, two gymnasiums, a library and a cafeteria.

The existing middle school, which the new building replaces, will be turned into a STEM (science, technology, engineering and math) campus for grades three through eight. It will open in the 2021-2022 school year.

The projects were designed roughly two years ago, around the time of shootings at Marjory Stoneman Douglas High School in Parkland, Florida, and at Santa Fe High School in Santa Fe, Texas, near Houston. The new middle school will have additional safety features to guard against school shootings, including bullet-resistant materials and a design intended to deter and detect intruders.

“The way the school is designed, we are able to limit the coming and going of people in such a way that threat detection can (take) place at a secure vestibule,” said JP Grom, vice president of Lockwood, Andrews & Newnam, the program manager for Stafford MSD’s bond program. 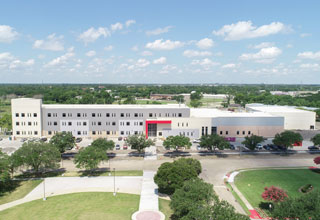