The Interstate 35 corridor, between San Antonio and Austin, is one of the fastest growing regions in the United States. According to projections from the Texas Water Development Board, the corridor population is expected to grow from 4.27 million in 2014 to 5.71 million in 2030— a 34 percent increase.

To meet the long term water needs resulting from this growth, the Alliance Regional Water Authority (Alliance Water), formerly the Hays Caldwell Public Utility Agency (HCPUA), has been working on a massive water supply project. The $450 million project, which will be completed in 2023, will deliver 22,000 acre-feet of treated drinking water per year, enough to serve several communities in the corridor until 2040.

The project’s planning began 17 years ago when the Hays County cities of San Marcos, Kyle, Buda and the Canyon Regional Water Authority, which supplies water to portions of central and south Texas, banded together.

“All the nearest water sources were fully allocated, and the area continued to grow very rapidly,” said Graham Moore, P.E., Alliance Water’s Executive Director. “The utilities dealt with this by instituting stringent water conservation measures while simultaneously investing in a future water supply.”

A feasibility study, performed by Lockwood, Andrews & Newnam, Inc. (LAN), a national planning, engineering and program management firm, identified the Carrizo-Wilcox Aquifer in eastern Caldwell County as the nearest groundwater source that will be able to deliver a large volume of high-quality water year-round to all the participants. For the next nine years, Alliance Water negotiated water leases with landowners and obtained permits from conservation districts to pump the groundwater from the aquifer. This was followed by a multi-year planning process to determine the infrastructure needed to produce, treat and deliver water to all the participants.

During the planning phase, Alliance Water decided to split up the project into two subphases – Phase 1A and Phase 1B. Phase 1A, which is much smaller than Phase 1B, consists of two segments of 24-inch diameter pipeline totaling five miles and a booster pump station to connect the water systems of Kyle and Buda.

“The City of Buda needed water sooner than anybody else,” said Moore. “They are also our smallest participant. We worked out a system where the cities of Kyle and San Marcos can share their excess water to meet Buda’s needs until the long-term Carrizo-Wilcox water becomes available.” 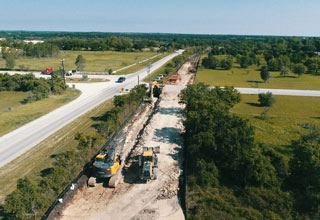