The Texas Department of Transportation (TxDOT), Houston District, has provided ferry service across Galveston Bay on SH 87 between Galveston Island and the Bolivar Peninsula for over 80 years. This free service represents the only means of public transportation across the Bay. Every year, millions of people, automobiles, and cargo are moved via this ferry route. The 2.7-mile trip takes approximately 18 minutes, saving motorists at least an hour of commute time on alternate local roads north of the Bay. This transportation link is also critical to the residents of Bolivar Peninsula. When a storm threatens, it serves as the quickest and primary means of evacuation through Galveston to the causeway and the mainland.

The ferry service fleet presently has six ferries. Each ferry has a six-member crew and can carry approximately 500 passengers and 70 vehicles. During the non-peak season, at least three vessels set out from the ferry landings from any given side across the waterway on 30- to 60-minute schedules, daily. During the peak season, additional ferries are used at more frequent intervals. Until 2011, TXDOT operated five ferries and four work docks at its Ferry Maintenance Facility. When a sixth ferry was added to its fleet, and since at least one ferry operates a 24-hour schedule, TxDOT recognized the need to expand and enhance the Facility, including the provision for a fifth work dock.

In June 2014, TxDOT contracted with Lockwood, Andrews & Newnam, Inc. to perform engineering inspections and condition assessments of both waterside and uplands elements at the Facility, including the bulkhead system, berthing and mooring structures, the bilge containment tank, approach ramps, and other ancillary structures. Mechanical and electrical equipment, dredging requirements, distressed concrete-paved uplands, and storm water conveyance were also evaluated. An aerial view of the site is shown in Figure 1. A Preliminary Engineering Report (PER) described the findings and recommendations for repairs or replacement of various engineering elements and systems required to restore the overall function, integrity, and serviceability of the Facility. Subsequently, a contract was awarded to Lockwood, Andrews & Newnam to perform detailed engineering designs and prepare the construction documents for the redesigned Facility. 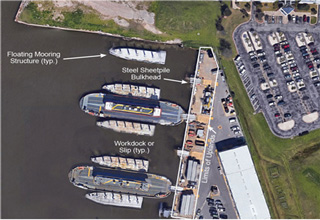