For the first time since its inception, the Gulf Coast Water Authority has to replace a pump station to secure a vital supply of cooling water to big industrial facilities lined up along Galveston Bay, from the island to Texas City.

Seventy years of pumping day and night has left the station badly corroded in parts, with cracks creeping up brick walls built in 1948. This is the youngest of GCWA’s pump stations – the oldest was built in 1908 – but this one has suffered the most strenuous use, feeding up to 45 million gallons of Brazos River water each day to coastal plants run by Dow Chemical Co., Marathon Petroleum Corp., Eastman Chemical Co. and Valero Energy.

Those customers can’t go a minute without water, so engineers must replace the station and move the nine vintage pumps it houses without interrupting flow. To do this, the pumps will be disconnected and hooked back up one at a time. The project is estimated to cost $14 million.

“Quite frankly, people in the Houston area don’t realize that the economy runs on water. Everything in the Ship Channel, all those refineries, petroleum plants,” said Mike Howe, executive director of the Texas section of the American Water Works Association. “In the long run, we’re looking at billions of dollars to maintain a system, and people don’t realize how valuable it is to them.”

Much of the country’s water infrastructure was built in the first half of the 20th century and designed to run for 75 to 100 years, according to a 2012 AWWA report that estimated a $1 trillion investment nationwide over the next 25 years would be needed to fix aging pieces and catch up with a growing population.

The association has dubbed these times “the era of infrastructure replacement.” 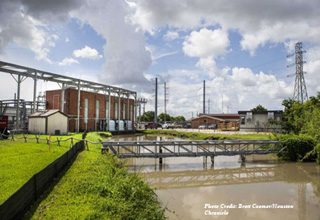