Layne Christensen, based in The Woodlands, is completing a six-well, 100,000-barrel-a-day pipeline from Pecos to the heart of the Delaware Basin, one of the busiest and most prolific oil fields in the United States.

Oil and gas companies are thirsty for water. Hydraulic fracturing, the process of pumping a mixture of water, sand and chemicals into a well under such high pressures the shale rock cracks and releases oil and gas, has revolutionized the industry. But oil companies need at least 500,000 barrels of water to frac a modern well. And much of that water is now trucked rather than piped to the well.

Layne says it can provide water more quickly, more reliably and for less money via pipeline. Layne hasn’t released specific figures, but some estimate it costs as little as 2 cents per barrel per mile to ship water via a pipeline compared to at least 9 cents – if not far more – for trucking.

Technology has dramatically changed the water business in the oil and gas industry. Companies now drill horizontal wells that run 10,000 feet, or longer, and pump them full of even more water to create more pressure in the well and produce longer, wider fractures in the shale.

Layne expects to spend about $18 million into the project, designed by Houston engineering firm Lockwood, Andrews & Newnam, and quickly recover its investment. At current water prices, the project could generate more than $30 million a year in revenues if Layne sells 100,000 barrels a day. 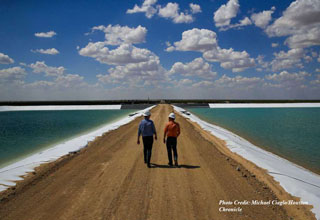