Building a sewer line in an urban area with minimal disruption to residents and businesses is a difficult task. Doing it in a tight corridor with multiple conflicting utilities, high-profile intersections and active railroad crossings is even more challenging.

The North Texas Municipal Water District faced all those obstacles when it decided to construct a parallel relief interceptor in Plano, Texas, but careful planning and execution have kept the project moving smoothly.

Over the last decade, Plano and its neighboring city, Richardson, have grown rapidly. The cities offer outstanding business and employment opportunities, schools, libraries, civic organizations and other resources that attract thousands of people every year. High-profile corporations such as State Farm, Frito-Lay, Toyota, Pizza Hut and NTT Data have established offices in the region, spawning residential and mixed-use development. This surge in population has increased current and future demands on the region’s sewer system. To meet these demands, forward-thinking officials at NTMWD identified a series of wastewater projects. The relief interceptor project was one of them.

“An evaluation we did in 2015 showed that we needed additional capacity in the existing Beck Branch Interceptor to meet current peak and projected flows,” says Bret Ellis, P.E., engineering manager at NTMWD. “Our existing 54-inch gravity interceptor was about to reach full capacity, so building a relief interceptor that would supplement current capacity was critical.”

The NTMWD was established in 1951 when 10 member cities decided to collaborate to provide water during one of the most devastating droughts in state history. In 1956, NTMWD provided water to 32,000 people. Today, the district serves 13 member cities and provides vital water, wastewater and solid waste management services to more than 1 million people. The district operates a wastewater collections system that consists of approximately 226 miles of large-diameter wastewater pipelines, 23 lift stations and various support facilities. This regional partnership has reduced costs, facilitated access to these services for communities large and small, and streamlined service delivery.

Following its 2015 evaluation, the district contracted Lockwood, Andrews & Newnam, Inc.(LAN) a national planning, engineering and program management firm, to begin the preliminary engineering phase of the relief interceptor. The firm performed a hydraulic study and evaluated several alternatives to determine the most viable option. For each alternative, the firm considered a range of factors, including system shutdowns, capital costs, phasing, annual operations and maintenance, right-of-way restrictions, constructability and impacts to the city of Plano. The firm also conducted an exhaustive route study to select the project corridor.

“This whole corridor is a complex system of pipelines,” says Justin Reeves, P.E., LAN’s vice president. “Several lift stations and force mains pump flows into the existing interceptor and, ultimately, to the Rowlett Creek Wastewater Treatment Plant. In addition, there is a parallel force main that carries flows directly to the treatment plant. We looked at numerous options such as replacing the existing interceptor with a larger pipeline, changing interceptors to force mains, and changing force mains to interceptors. The idea was to find a solution that maximized the previous investment in existing assets and achieved capacity goals at the same time.” 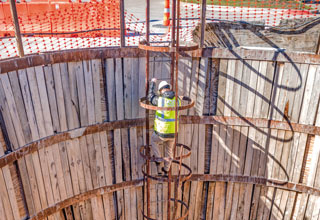