Easton Park is a 2,300-acre planned unit development in one of the fastest growing areas in southeast Austin. The development will include over 12,000 units, retail and commercial space, more than 350 acres of parks and green space, and 13.1 miles of trails. As part of this development, Brookfield Residential reached an agreement with Travis County to build the East Slaughter Lane Improvements.

“This next phase of Easton Park will build upon the connectivity of the community,” said Matt McCafferty, senior director of land at Brookfield Residential Properties – Southwest. “We’re excited for the years ahead to see Easton Park and the surrounding areas evolve, while still embracing the true sense of community that is uniquely Austin.”

Phase 1 of the improvements consists of two lanes of the ultimately six-lane roadway and full intersections at Thaxton Road, FM 1625 and US 183. The improvements will include storm sewers, five culvert crossings, water quality and detention facilities, four traffic signals, bike paths and sidewalks. The firm will also coordinate the parallel waterline and wastewater line crossings that will serve the development. A portion of Apogee Road will also be modified to accommodate the intersection with East Slaughter Lane.

In addition, LAN will design improvements to FM 1625 and US 183 under a donation agreement with TxDOT (This agreement is under negotiation). These improvements will consist of turn lane additions along both roadways, associated widenings, drainage improvements, culvert extensions, and parcel acquisitions to accommodate the improvements.

“The project will provide east-west connectivity for the development and surrounding areas to US 183 and SH 130 to the east and IH-35 to the west,” said Steven Widacki, P.E., LAN’s project manager. “The project will also allow development to continue in the Easton Park project south of Slaughter Lane.”

Design of the East Slaughter Lane Improvements will be completed in September 2021 and construction is anticipated to begin in the second quarter of 2022. 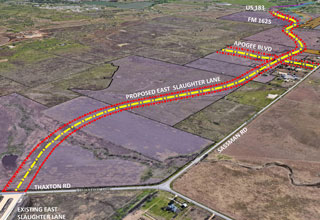