A small thunderstorm three years ago pushed more than a foot of floodwater into Stan Cook’s home in the small community of Clear Lake, ruining old home movies, destroying kitchen cabinets and causing more than $130,000 in damage.

So when Hurricane Harvey dropped biblical amounts of rain on the region in August, he braced for the worst. Yet, only an inch of water crept into his Reseda Drive home, soaking carpets but not much else.

The reason for the drastic change: A new golf-course-turned-lagoon-sized detention pond sprawling just beyond Cook’s backyard.

The record-shattering rains that Harvey unleashed here in August killed about 50 people in the greater Houston area, displaced thousands and caused billions of dollars in damage. Ever since, residents and regional leaders have debated how best to rebuild neighborhoods to prevent future catastrophic flooding.

A project in the Clear Lake neighborhood of southeast Houston, called Exploration Green, is being heralded as a solution: living with water rather than constantly fighting off floods.

Started last year, the project is using a $28 million bond approved by voters to transform a former golf course into a sprawling 178-acre greenway that when completed will include bikeways, bird habitats, wetlands and a series of detention ponds with the capacity of holding 500 million gallons of rainwater. The project is being built in five phases and is scheduled for completion in 2021. 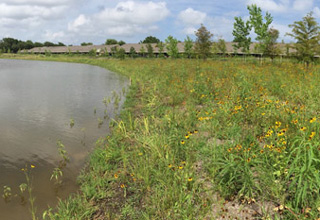