The Salinas Rail Extension will extend passenger rail service 68 miles from Gilroy in Santa Clara County south to Salinas in Monterey County, with connections to San Jose, Oakland and Sacramento. Construction will begin next year with service expected to start in 2020.

The $69.7 million “kick-start” initial phase of the project includes improvements at the Salias Station, a two-train layover facility in Salinas, improvements to the Union-Pacific-owned Coast Main Line track between Gilroy and Salinas, track improvements in Gilroy to allow for run-through service, and minor improvements to the Gilroy, Morgan Hill and San Jose Tamien stations (located in Santa Clara County). LAN, which will serve as a sub-consultant to MNS Engineers, will provide track and rail construction management, design review, quality control and office engineering.

Future phases will include a new station in Pajaro/Watsonville, expansion of the Salinas layover facility, and a new station in Castroville.  The service will start with two round trips, expanding to up to six round trips as demand warrants. Once built, the project will provide an alternative to the congested US 101 corridor and enable access to jobs, education, health care and interregional transportation in Silicon Valley and the San Francisco Bay Area. It is also expected to promote mixed-use, transit-oriented development, affordable housing and economic growth around the three stations.

“The Salinas Rail Extension will not only address Monterey County’s growing transportation needs but also serve as a catalyst for economic development,” said Sima Vajdani, P.E., LAN’s vice president. “We are looking forward to working with TAMC and MNS Engineers to successfully implement the first phase of this project.” 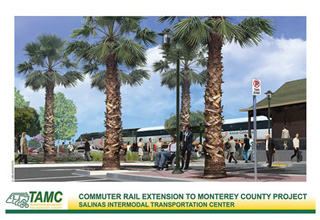