When developers attempted to convert a 200-acre defunct golf course in Houston into a commercial development, various groups coalesced with another idea: to turn the vast acreage into something more green and sustainable.

The Clear Lake City Water Authority (CLCWA), which owns the property, first held five town hall community meetings to determine what other multipurpose ideas neighbors would suggest for the space. After narrowing down community responses, the decision was made to transform this massive parcel of land into Exploration Green, a storm retention system and recreational green space for 40,000 local residents.

The total cost of the project is approximately $41.7 million across five phases. The first phase of the design-bid-build project began construction in 2015. Despite the more recent challenges of the global pandemic, the project has forged ahead, on schedule. The team has also started installing plantings and performing maintenance work on the project’s already completed phases.

Not only will Exploration Green serve as a storm retention system equipped with detention ponds that hold 100 million gallons of water, it will boast 105 acres of natural habitat with wetlands and native grassland areas. It will also be equipped with 12 miles of walking trails, two athletic fields and will be home to more than 1,000 native species.

“During the construction of Phase 1, we were about 80% complete when Hurricane Harvey happened,” says Kelly Shipley, an associate and team leader at Houston-based Lockwood, Andrews & Newnam Inc. (LAN), the project’s design engineer. “The neighbors saw how well it performed. It protected 400 homes during Harvey. They saw the value it’s bringing to the community. The board accelerated the project, and now we’re doing one phase per year.” 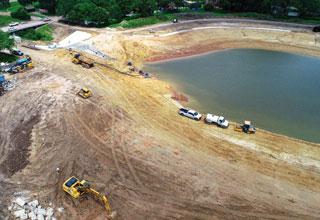