The unnamed, two-story school will hold 1,000 students, with 49 classrooms, a gymnasium, a library, a maker space, a cafeteria and a stage, music and art rooms. The design is based on the existing Southside Elementary, and the project will cost roughly $30 million. It’s expected to be completed in summer 2021. Texas-based Huckabee is the architecture firm on the project, McKinney, Texas-based Pogue Construction is the general contractor, and Houston-based Lockwood, Andrews & Newnam is the program manager.

Cleveland ISD is the fastest-growing school district in Texas, Superintendent of Schools Chris Trotter said. The district, which currently has 8,600 students, might reach as many as 15,000 by 2025, he estimates. The district has grown nearly 125% since the 2014-15 school year, when it had 3,829 students, according to a November 2019 presentation. 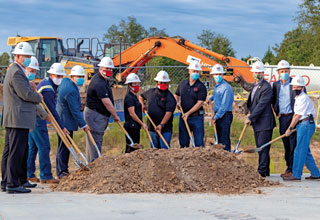