Lockwood, Andrews & Newnam, Inc. (LAN), a national planning, engineering and program management firm, designed a comprehensive upgrade and rehabilitation project for the City of Conroe, Texas, Southwest Regional Wastewater Treatment Plant (Southwest WWTP). As part of the upgrade, modifications and improvements were made to the existing aerobic digestion process and dewatering system.

The plant has been operating since the mid-1970s and has had two prior plant expansions. It had been approximately twenty years since the last expansion, and most of the equipment in the plant had reached or exceeded its design operating life. As part of the last expansion, a new aerobic digester had been installed. Based on the size of the basin, and the two-stage design, it was calculated that there was an expected influent concentration to the digester of at least 4%. To achieve this concentration, the previous design had included gravity belt thickeners (GBTs). Unfortunately, the design included open channel flow for transportation of the thickened sludge to the two cells of the aerobic digester.

The operator had reported that when the unit was started up, the thickened solids failed to flow to the digesters. The GBTs were shut down and the thickening operations were never used after the initial attempt to operate. Fortunately, the plant had an abandoned 1.5 million gallons a day (mgd) contact stabilization plant that was put into service as a “second” stage digester, allowing them to meet their Class B solids requirements.

Decommissioned contact stabilization that was used as the “second stage” digester. 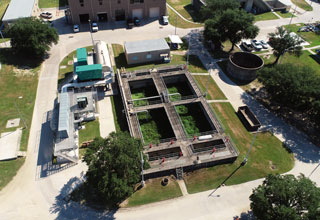