The plant treats 6 million gallons a day (mgd) and this is expandable up to approximately 12 mgd, which serves as a testament to the city’s rapid growth and growing infrastructure needs. According to five-year estimates from the U.S. Census Bureau, Conroe’s population jumped 61% from 2013 to 2018.

The city of Conroe provides drinking water from the Jasper aquifer and Catahoula aquifer, as well as surface water from Lake Conroe. Conroe also treats a small portion of wastewater from the city of Willis and the new plant will continue to service Willis as well, according to city officials.

The new plant was designed by Lockwood, Andrews & Newnam (LAN) and constructed by LEM Construction. The Central Wastewater Treatment Plant will serve the city’s area east of I-45, while the city’s existing plant will serve the western half. The new plant lessens the load on the existing Southwest Regional Wastewater Plant, which is nearing an important capacity benchmark established by the Texas Commission on Environmental Quality 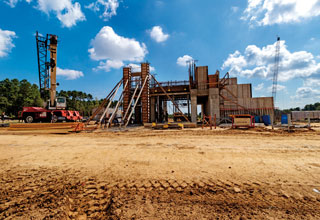