As a general rule of thumb, water well drilling jobs have a set timeline — they may take a day, they may take months, but not forever. And, almost always, the client owns the well and the property it resides on — they may be a homeowner, they may be a municipality, but the product is theirs to keep. Layne Christensen Company, one of the largest water well drilling companies in the country, is turning these two traditions on their heads.

In light of rising demand for water in fracking operations, the company is growing from a well producer to a water supplier. Layne expects water usage within the energy sector to more than double over the next two years, especially in the Delaware Basin. Its new energy infrastructure business seizes the opportunity to provide oil and gas clients in West Texas with the millions of gallons of water per day they need. The innovative endeavor makes Layne the driller of its own wells, and there is no moving on; the company’s involvement is ongoing.

“This is a different business model from kind of the service aspect … where it’s, ‘Come drill a well and move on, and we’ll call you back if we need another well,’ ” says Byron Bevers, business development engineer with Layne. “This is more of a midstream approach where we believe we can provide value to multiple customers by basically sharing cost across a broader range, and deliver water instead of delivering a well.”

The water well drilling enterprise created an $18 million water system pulling from 1,000 acres of company-owned land in Pecos, Texas. The property includes six high-capacity water wells, one pump station and two in-ground storage ponds. It is the starting point of a 20-mile-long pipeline that extends northward, toward Orla, Texas. The pipeline — 22 inches in diameter — delivers up to 100,000 barrels of non-potable water per day to what Layne considers one of the most active oil and gas drilling areas in the U.S.

While Layne handled all water well-related work in-house, third-party contractors installed the pump stations, storage pits and pipeline. Since each aspect of the project was handled simultaneously, Layne contracted engineering firm Lockwood, Andrews & Newnam Inc. (LAN) to oversee design and construction. “It was a 90-day construction schedule for 107,000 linear feet [of pipeline], so it was extremely aggressive. Everybody had to be communicating daily to keep this thing moving forward. Coordination during construction was definitely a big effort,” says Alex Kajdan, LAN project engineer. 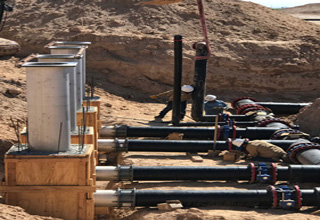