When Clear Lake City was established in the 1960s, a golf course was built in the middle of the master-planned community. Today, that golf course is preventing nearby homes from flooding.

The redevelopment project, Exploration Green, is turning the golf course into a green space with five detention ponds. The first pond, though not quite finished, protected at least 150 houses from flooding during Harvey, project leaders said. When completed, Exploration Green is expected to protect between 2,000 and 3,000 homes near the flood plains by Horsepen Bayou.

That estimate is based on removing several subdivisions from the 500-year flood zone, lowering the level of Horsepen Bayou and lessening downstream impacts on Taylor Lake Village and other communities near Clear Lake, John Branch, the board president of the Clear Lake City Water Authority, said. The ponds will be able to hold half a billion gallons of water, he added.

But Exploration Green won’t just be a series of ponds and wetlands, it will also contain walking trails, benches, athletic fields and open spaces built to aid conservation when completed in 2021 — a more accelerated construction date than originally anticipated.

Exploration Green has already received numerous awards for its master plan and community partnerships, and it has secured an agreement with the Galveston Bay Foundation to protect the area from commercial development in perpetuity.

Leaders of Exploration Green believe it can be a model for the region as greater Houston plans infrastructure projects to prevent flooding events similar to Harvey.

“I think people can look at this project and see that it can be done in their neighborhood as well,” said Kelly Shipley, a project manager associate of Lockwood Andrews & Newnam Inc., which is overseeing the planning and construction of Exploration Green. 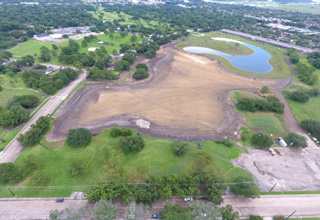