His distinguished gray beard earned him the nickname “Old Man Winter.” He wears it well. With over four decades in municipal water, Warren Green, PE, of Lockwood, Andrews & Newnam, Inc., is respected among his peers and a beacon for the new generation. In the process of building his career, Green became his own man. When a lot of folks were moving from north to south, Green went in the opposite direction, leaving Jackson, Mississippi for Chicagoland in 1988. He has an herb garden – fresh basil, cilantro, and rosemary year-round – builds 18th Century furniture, owns a trove of over 100 antique engineering texts, and can tell you about a miraculous Civil War-era bridge over Potomac Creek that seemed to be made of “cornstalks and beanpoles.” And, most importantly, he was blessed with the gift of fatherhood when he was 50, an event that changed and enhanced his life. Indeed, any which way you cut it, Green is just a bit different from the rest. But when you set aside the personal background that makes him unique, one finds an engineer’s engineer, a man whose top priority is to devise an economical solution to a problem. And he’s done plenty of that. He was part of the team that brought Lake Michigan water to surging DuPage County, Illinois, an achievement that Green counts among his finest. But it being a water utility, that accomplishment, among others, was essentially cloaked in anonymity. Those who labor over piping systems and fluid dynamics just don’t get the kind of public recognition given to the builders of skyscrapers. But Green doesn’t mind. If the job is done right by the client, he’s satisfied.

“My career has touched millions of people and they don’t even know it,” he said. “I’m okay with that.”

A Conversation with Warren Green

Civil + Structural Engineer: You graduated from college in 1978 and have 40 years of experience. Looking at the latest generation of water and wastewater engineers, what’s your advice to them?

Warren Green: Take some time and learn the history of our profession. And that means not just reading it but delving into the theory that our predecessors developed when addressing design questions. The early engineers had to “figure out” the solutions without the aid of computers or even calculators, so their mathematical calculations were elegant. We still use many of these equations today, such as the Barlow Hoop Stress equation for the design of pressure pipes. The equation was developed in the early 1800s. 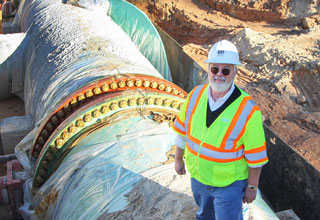