Crews are nearing completion on a $21 million extension of University Boulevard from US Highway 90A to Stadium Drive that is expected to relieve congestion and provide easier north and south travel in Sugar Land.

The extension was first identified for the city’s thoroughfare plan in the 1990s, but wasn’t planned for completion until 2020, according to City of Sugar Land Project Manager Keisha Seals. However, the project was prioritized because of population growth in the area, as well as the relocation of oilfield chemical company Nalco Champion’s headquarters to that stretch of road.

Seals explained that the city planners believed the extension would be necessary once the stretch of US Highway 90A reached 60,000 cars driving on it a day. It reached that number several years before they had originally anticipated.

Construction began on the extension in August 2015 and is slated to wrap up in the first quarter of 2018.

Although the extension only stretches half a mile, the $21 million project included several complexities, including two railroad crossings and a bridge.

Engineers with the project’s design engineer, Lockwood, Andrews & Newnam, Inc. (LAN) and the city had to coordinate the relocation of Union Pacific railroad tracks, the creation of a new railroad crossing, some issues with soil and drainage as well as some nuances to create a level and drivable route, according to LAN bridge engineer Lauren Van Andel. 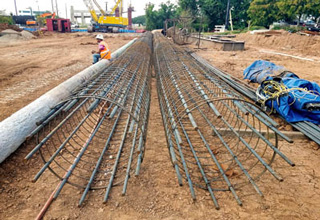