Under the River and Through the Pipe (Source: Water & Wastes Digest)

Fort Worth, Texas, is the 15th largest city in the U.S. and provides water and sewer services to more than 1.2 million North Texas residents. Its wastewater collection system exceeds 3,300 miles of pipelines with more than 255 miles of 24-in. and larger diameter pipe. The city is divided into six collection basins, of which the Sycamore Creek interceptor basin is one. The existing Sycamore Creek interceptor is a combination of 48-, 54- and 60-in. diameter unlined reinforced concrete pipe installed in the early 1960s.

In 2010, the city began a multi-year program dubbed the Interceptor Condition Assessment Program (ICAP) with the goal of inspecting its large diameter sanitary sewer lines, evaluating their condition, and prioritizing repairs and response strategies. The program deployed sonar, 3D lasers and high-definition video equipment to inspect pipes from the inside, and at the time was one of the largest known implementations of this technology in the world. As part of a systematic response to the ICAP findings, the city addressed condition deficiencies in the Sycamore Creek basin in 2014.

In 2014, the city selected Lockwood, Andrews & Newnam Inc. (LAN) to evaluate the assessment data and develop a rehabilitation plan for the existing interceptor. During the development of plans for selective rehabilitation of the pipeline, it was determined that the rehabilitated gravity sewer would not be able to carry projected peak flows through the basin. Rehabilitation would provide improved hydraulics, but not enough to carry the projected 2030 flows. 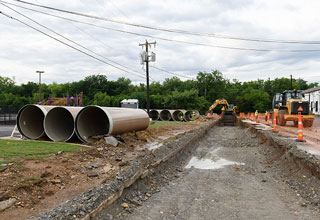