A Shoulder to Drive On (Source: Civil + Structural Engineer)

State Highway 121 is a major highway that runs from southwest to northeast through north central Texas. It cuts across the Dallas-Fort Worth Metroplex in a wide variety of configurations, from a freeway in the urbanized areas, to a two-lane country road just outside the Metroplex.

For a 3.5-mile section between SH 183 and Glade Road in northeast Tarrant County, SH 121’s configuration changes from three general purpose lanes to two in each direction. With an average daily traffic of more than 130,000 vehicles, the bottleneck at this section causes drivers to squeeze into a tighter space. Speeds drop and gridlock ensues. In fact, it’s not uncommon for traffic to back up for several miles during peak periods.

“The congestion had reached a level where we needed a solution quickly,” said John Cordary, TxDOT Fort Worth District’s deputy district engineer.

To alleviate the congestion, the Texas Department of Transportation (TxDOT) proposed an innovative traffic fix: widen the inside shoulder into a third lane for use during peak hours.

To implement this operational solution, in January 2017, TxDOT selected Lockwood, Andrews & Newnam, Inc. (LAN), a national planning, engineering and program management firm, as the lead design engineer. Maldonado-Burkett was on the project team to implement the project’s Intelligent Transportation Systems (ITS). 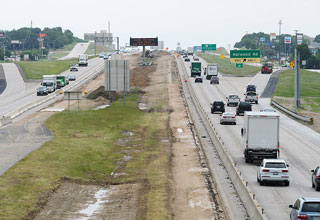