The City of Houston and Seven of its Co-Participant Members to Build New Southeast Transmission Line (Source: Civil + Structural Engineer)

(HOUSTON) The City of Houston is partnering with seven cities and water authorities to build a new southeast transmission line that will transmit up to 75 million gallons a day (MGD) of surface water from the Southeast Water Purification Plant.

The new 54-inch water line, which will be completed in 2025, will serve the City of Houston and its partners, including League City/Gulf Coast Water Authority, Clear Lake City Water Authority, City of Webster, City of Friendswood, Baybrook Municipal Utility District (MUD) No. 1, Harris County MUD No. 55 and City of Pasadena. Approximately, 10 MGD of water will be distributed to the City of Houston’s customers and its partners will receive 65 MGD of water.

The new water line will replace an aging 42-inch water line that currently runs from the Southeast Water Purification Plant to League City’s booster pump station along Highway 3 in Webster. The existing nine-mile water line, constructed in the early 1970s, is nearing the end of its expected design life.

“The City of Houston is excited to work with The Co-participants and consultants in replacing this critical piece of aging infrastructure to better serve the region for the next 50 years,” said Jeff Masek, P.E., CCM, City of Houston Public Works assistant director – capital projects. 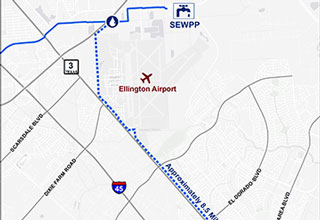