A flood risk reduction program in Texas is seeking minority- and woman-owned small businesses in order to provide relief to low-to-moderate income communities in a flood-prone area.

The Halls Bayou Bond Implementation Program includes 14 projects planned to be built over the next five to seven years at an estimated cost of more than $400 million. Construction of two of the projects has already started, and bidding for another opened on Nov. 5 and will close on Nov. 29.

The area along the 20-mile bayou watershed in north-central Harris County, including part of Houston, has a long history of repeated flooding. Dena Green, planning department manager at the Harris County Flood Control District, says about 13,000 homes flooded along Halls Bayou as a result of Tropical Storm Allison in 2001, and 2017’s Hurricane Harvey flooded nearly 12,000 homes in the area. The watershed has faced 14 major floods since 1989, officials say.

A year after Hurricane Harvey, local voters passed a $2.5-billion bond program to fund hundreds of flood risk reduction projects. That bond election included a commitment to pursue outside partnership funding from state and federal agencies for a total planned program value of $5 billion, says Alan Black, interim executive director of the Flood Control District. However, as ENR previously reported, officials have faced some difficulty funding all the projects, facing a gap of as much as $1.4 billion across the district. 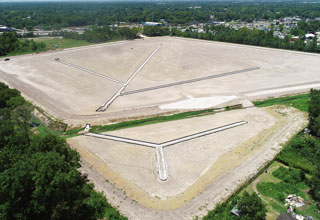