Goose Creek Consolidated Independent School District, which encompasses Baytown and surrounding areas, is roughly a year into its 2019 bond program, and several projects are underway.

One such project is the new Edward Franklin Green Junior School, which broke ground in May. It will be 192,000 square feet over two stories and will house 1,100 students. The new features will include a 700-seat auditorium, two competition gyms, a media center, several computer labs, a band hall, and choir and theater programs. The project will cost $49.6 million and is expected to be completed summer 2021. Texas-based Pfluger Architects, which has a Houston office, is the designer, and the contractor is McKinney, Texas-based Pogue Construction, which has an office in The Woodlands.

San Jacinto Elementary School will have a new 102,000-square-foot building that can accommodate 800 students. It will include a media center, gym, multiple computer labs and an outdoor learning center. It will cost $22.5 million and will be completed in December 2021. It’s being designed by Houston-based PBK, and the contractor is Houston-based Marshall Construction. 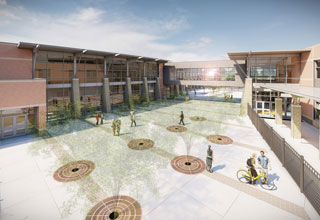