The second phase of a major local flood-control project has wrapped up amid a record-breaking hurricane season.

The overall project will feature five detention ponds — each holding 100 million gallons of stormwater — as well as 105 acres of natural habitat with wetlands and native grass land areas, 6 miles of hike-and-bike trails, two athletic fields and other amenities. Of the 40,000 people living in the direct Clear Lake area, nearly 70% will be within walking distance from one of the sections of Exploration Green, with the other 30% less than a mile from part of the project.

“Exploration Green is transforming Clear Lake from a flood-prone community into one of the most flood-resilient communities in Texas,” said Wayne Swafford, LAN’s president. “In addition, it is creating a healthy, sustainable neighborhood for its residents.” 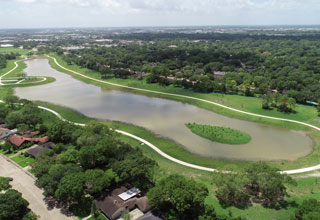