The crumbling ruins of what was once a popular health spa in San Antonia, Texas, are in the midst of a transformation to convert the site into a new public park. At press time, the first phase of the restoration project was expected to open in mid-November.

Located along the San Antonio River, the property has been known by various names since the spa first opened in 1894, most including the phrase “Hot Wells” in reference to the sulfurous mineral waters that were piped from a well to swimming pools and baths. An elegant hotel on the 22-acre site and luxurious bath house welcomed such celebrities as Will Rogers, Charlie Chaplin, Theodore Roosevelt, Douglas Fairbanks, and railroad Tycoon E.H. Harriman during the resort’s heyday in the years prior to the First World War. Harriman, who had been president of both the Union Pacific and Southern Pacific railroads,  even had a spur line constructed for easier access to the site. The Hollywood connection was especially strong, given that several silent movies were filmed on the grounds. 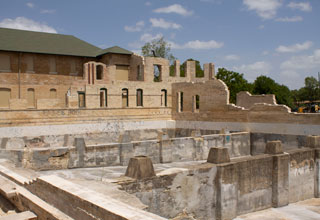