Nine-foot-wide pipe — tall enough for WNBA player Tina Thompson to stand in with three basketballs balanced on her head — was recently carted to Houston in 25-foot sections and laid 30 feet below ground near U.S. 59 and Texas 8.

The pipe is the backbone of the Northeast Transmission Water Line, which will bring 365 million gallons of water a day from the Lake Houston reservoir to the city and surrounding counties. The pipeline, nearly 17 miles long, is Houston’s most ambitious water project ever, aimed at reducing the metro area’s reliance on groundwater and providing for a population expected to grow by nearly 50 percent to 10 million by 2040. 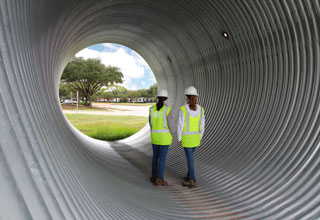