Amid rigorous scheduling demands, construction is wrapping up on an $18 million project to build a 20-mile, high-capacity pipeline in Pecos to deliver water for use in hydraulic fracturing projects.

The water infrastructure system will deliver more than 100,000 barrels of water per day to energy producers in the Delaware Basin, one of the most active oil fields in the U.S.

Layne Christensen Co., a large water well drilling company based in The Woodlands, Texas, is the project owner. The system is anchored by nearly 1,000 acres of company-owned, highly productive, water-producing land near Pecos. Infrastructure will include non-potable water wells, pump stations and in-ground storage reservoirs.

Houston engineering firm Lockwood, Andrews & Newnam (LAN) designed and managed construction for the pipeline and infrastructure system. In completing the project by the end of July, contractors will have met the demands of an ultra-tight schedule, which included a roughly 90-day window to construct the pipeline. All told, contractors installed nearly 107,000 linear ft of 22-in DR-17 pipe.

“Probably very few pipelines have been installed with the amount of linear footage and the size of pipe we had, and in the time frame in which it was constructed,” says LAN project engineer Alex Kajdan.

Layne needed to install the line to start selling water as soon as possible to meet the demands of its oil and gas customers and start selling water right away. “Schedule is definitely one of the biggest constraints on this project,” says Byron Bevers, business development engineer for Layne Christensen. 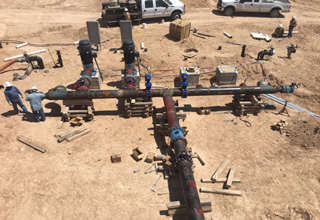