The Woodlands-based water infrastructure company, Layne Christensen Co. (Nasdaq: LAYN), is pushing further into the energy sector with the completion of a high-capacity water pipeline and the associated infrastructure in the Permian’s Delaware Basin.

The $18 million system can move 100,000 barrels of water per day, CFO Michael Anderson said, and the pipeline itself has room to move up to 200,000 barrels per day with a few adjustments to the infrastructure.

“Plain and simple, the Delaware is the hottest place to be,” Anderson said.

The system was built on top of an aquifer in the region, but to the north, east or west, water becomes a lot harder to find, Anderson said. Longer term, Anderson said Layne may extend its reach further afield in those directions.

“Traditionally, producers didn’t need as much water as they do now,” Anderson said. “We believe that the monstrous appetite for water continues to grow.”

The project’s design wasn’t particularly challenging, but the project was carried out at a fast pace in order to meet customer demand, said Steve Gilbreath, a vice president for Lockwood, Andrews and Newnam Inc., the firm that handled the engineering for the project.

The project was built with a major anchor customer in mind, and part of the deal’s terms was that Layne had to start shipping water by Aug. 1, Anderson said.

“We knew from the get go that it was going to be a tight schedule,” Anderson said.

The timeline meant Gilbreath and the others at LAN had to think on their feet in a few situations. In one case Gilbreath recalled, the project had trouble finding a supplier for the physical pipe it needed to lay in the ground. 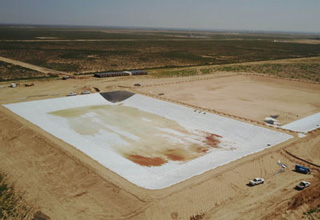