The Nueces County Courthouse is getting a facelift. Work recently began to replace the exterior facade of the courthouse at 901 Leopard St. in Corpus Christi. The deteriorating travertine stone will be removed and replaced with new travertine. Other elements of the building’s shell also will be replaced, all aimed at stopping water from leaking into the building.

Leaks have closed offices and caused mildew to grow over the years. A piece of stone from the building’s facade fell in 2019, cracking a triple-pane window. Scaffolding, plywood, and safety netting have been erected to protect the building and passersby. At least 60 percent of the facade needs to be replaced, according to Nueces County Judge Barbara Canales.

County commissioners approved a contract on Jan. 20 with Phoenix 1 Restoration and Construction. The program manager for the project is Lockwood, Andrews & Newnam, Inc. Architect is Richter Architects. 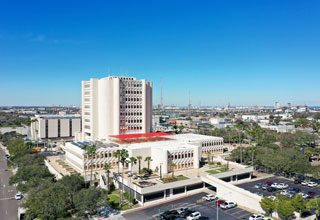