The IPS was originally constructed in 1949 with three vertical turbine pumps. Subsequent expansions in 1952, 1957 and 1965 added six more pumps for a total capacity of approximately 96 million gallons a day (mgd). Although the pumps were well maintained and functioned adequately, most of the infrastructure needed rehabilitation or replacement. The valves were in poor condition and were essentially inoperable. Visible portions of the steel discharge piping exhibited major corrosion. The integrity and reliability of the entire discharge piping and header were compromised. The pump station building’s brick wall cladding, roofing system, doors and windows also had several defects.

In 2010, the GCWA retained a national planning, engineering and program management firm to evaluate the condition of the existing pump station and develop rehabilitation alternatives. The IPS has a long history of uninterrupted service to its industrial users. Any interruption to the water supply meant these users would lose millions of dollars a day in revenue. As such, maintaining pump station operations and ensuring continuous water supply to GCWA’s industrial users during construction was of paramount importance. 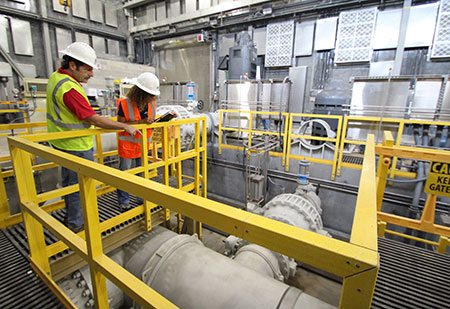