Faced with an aging drinking water transmission main approaching the end of its design life, Houston Public Works and several local partners have begun design work on a nearly 18 mi long, $120 million replacement project. To be installed in a densely developed region, the Southeast Transmission Water Line will serve a fast-growing region of the Houston metropolitan area.

The new transmission main — which ranges in diameter from 36 to 54 in. in diameter — will replace an existing 42 in. diameter main that was installed in the early 1970s. As it nears the 50-year mark, the main has begun showing signs of age, says Melissa Mack, P.E., M.ASCE, a vice president and principal for the planning, engineering, and program management firm Lockwood, Andrews & Newnam Inc., which is serving as the technical adviser for the Southeast Transmission Water Line project. In recent years, the existing main has experienced numerous leaks, typically at the joints, says Mack, who is the primary project manager.

Given the age of the pipeline and its history of leaks, the city of Houston and its partners on the project decided that the time had come to replace the existing main, says Panduranga “P.K.” Kuruva, P.E., the managing engineer of the surface water program for Houston Public Works. “After 50 years, we cannot take more chances,” Kuruva says.

The existing line also is located within the right of way of Texas State Highway 3 (see project map, below), which the Texas Department of Transportation plans to expand in the future. As a result, “there is a need for the city and its partners to have a new line in a space where they have control over it without intruding into the Texas Department of Transportation’s right of way,” Mack says. 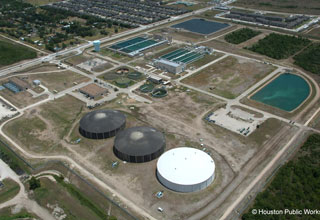