Conroe, Texas, has been one of the 15 fastest-growing cities in the U.S. over the last 10 years, according to the U.S. Census Bureau. To keep pace, the city is building the $60-million Central Wastewater Treatment Plant (WWTP) with an initial capacity of 6 million gallons per day, expandable to 12 MGD. However, this effort encountered numerous obstacles, including a late-term design site change that triggered a series of budgetary and logistical hurdles.

“There is significant residential and commercial/industrial expansion in the Conroe area. Consequently, there is projected to be a substantial increase in wastewater treatment plant flows and demand in the very near future,” he adds.

When the facility comes online in spring 2022, it will increase the city of Conroe’s treatment capacity by 50%. It will be the first plant in the city to use ultraviolet disinfection, which will allow the facility to avoid the risks associated with chlorine gas disinfection.

LAN designed a master plan for Conroe’s wastewater treatment plant back in 2010, and subsequently designed improvements to Conroe’s existing Southwest Regional Wastewater Treatment Plant, Schlafer says. However, when the project was completed in 2016, that plant’s capacity was already approaching 75% capacity—and the Texas Commission on Environmental Quality requires that a new plant must be under design once an existing plant reaches 75% threshold capacity, he says. 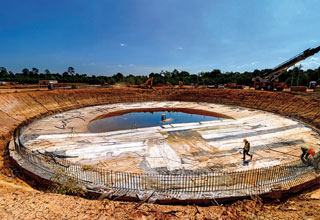