In search of a flood fix, one Houston community turned to a golf course (Source: The Texas Tribune)

In 50 years living in Clear Lake City, Spyros Varsos had never seen the floodwater get so high. During a historic rainstorm two years ago, he watched anxiously as it quickly accumulated in the street outside his three-bedroom home. So this summer when even heavier rains drenched the greater Houston area in the wake of Hurricane Harvey, he was even more fearful.

But his home didn’t flood. For that, he credits some precautions he took of his own, like clearing debris from the drains on his street. What he said made an even bigger difference, though, was a nearby flood control project that wasn’t even completed yet.

A few blocks away from Varsos’ house, the Clear Lake City Water Authority has embarked on a $28 million project to retrofit a shuttered golf course with five detention ponds that will be able to hold half a billion gallons of stormwater.

Only one of the ponds was near completion when Harvey hit. Still, it prevented about 100 million gallons of water from pouring into the drainage system. John Branch, the water authority’s board president, estimates the pond — only 80 percent excavated at the time — saved 150 area houses from flooding during the historic downpour.

As a post-Harvey Houston figures out how to protect itself from the next big storm, he and other local officials say they hope the project will serve as an example of how communities can take matters into their own hands as they await the completion of large-scale flood control projects. 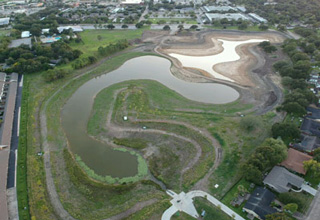