Houston is tackling the threat of destructive hurricanes and flooding (Source: Business Insider)

When the sun came back out, much of Houston and the surrounding area was in ruins. The storm destroyed between 30,000 to 40,000 homes, waterlogged around around a half-million cars, and damaged power lines for thousands of people.  The Federal Emergency Management Agency (FEMA) is now spearheading $50 billion in relief efforts after Harvey and other devastating hurricanes that hit Florida, Puerto Rico, and the United States Virgin Islands this summer.

Scientists say that climate change will only continue to make storms more destructive.  At the same time, the Trump administration has seemed reluctant to discuss America’s contribution to global warming. Nevertheless, flood-prone cities like Houston are increasingly searching for ways to make themselves less vulnerable for the next inevitable hurricane.

Clear Lake City (located around 20 miles southeast of downtown Houston) is transforming a shuttered 1960s-era golf course into a site that will help reduce flooding in the area. The Clear Lake City Water Authority is building five detention ponds that will be able to hold half a billion gallons of stormwater — or around the same amount as 750 Olympic-sized swimming pools. The Exploration Green Conservancy (EGC), SWA Architects, and urban planners from LAN are also involved.

The $28 million project broke ground in early 2016 and will be complete by 2021. Only one of the ponds was 80% finished when Harvey hit, but it still prevented around 100 million gallons of water from flowing into the Houston area’s drainage system, LAN’s project manager, Kelly Shipley, told Business Insider. She estimates that the pond saved 200 nearby homes from flooding during the storm. 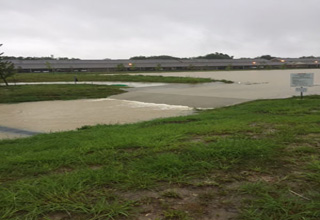