New details have emerged about two facilities the Stafford Municipal School District is building under a $62 million bond program passed in November 2017.

Construction is underway on a new $26 million middle school that will be capable of accommodating 950 students in grades six through eight. The school district is also working to add a $6.5 million administration building.

The middle school will be a three-story structure, encompassing 127,262 square feet. It was designed to include cutting-edge science laboratories, a library, two gymnasiums and a cafeteria, according to a spokesman for Houston-based Lockwood, Andrews & Newnam, which is overseeing the projects as program manager.The middle school is scheduled to be completed in June 2020, before the 2020 school year beings next August. The new middle school will replace the district’s existing middle school, which was built in 1983.

The new administration building is also designed to replace an existing building owned by the district. The new two-story, 26,362-square-foot administration building will include administrative offices, training and conferences areas, as well as a board room for meetings. The building will also provide space for computer training, executive office areas, two libraries, conference areas, two gymnasiums, a district memorabilia room and a staff lounge area, the LAN spokesman said. 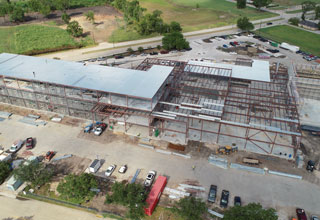