The Texas Department of Transportation (TxDOT) will begin construction early this year on a project to expand and modernize the bulkhead at the maintenance facility for the Galveston Port
Bolivar ferry.

The facility supports the operations of the ferry, which accommodates several million passengers a year. The ferry provides local motorists with a vital connection on Route 87 between Galveston Island and the Bolivar Peninsula, operating at least one vessel each hour 24 hours a day and multiple ships during peak hours. The ferry can save some motorists more than an hour on local
routes, helping them avoid circuitous paths around Trinity and Galveston bays. TxDOT placed a new ferryboat into service in 2011 and began to consider ways to expand and improve the bulkhead.

TxDOT hired Lockwood, Andrews & Newnam, Inc. (LAN), headquartered in Houston, to assess the waterside and landside infrastructure. This work included an extensive evaluation of the bulkhead wall, of the areas paved with concrete, and of the mechanical and electrical equipment that supports operations, according to Percy R. James, P.E., LEED AP BD+C, M.ASCE, LAN’s structural engineering group leader. 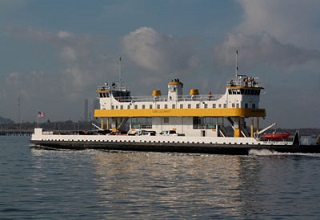