In the Houston suburb of Clear Lake, an almost 200-acre nature park called Exploration Green is underway, complete with wetland preserves and at least six miles of hike-and-bike trails. But what makes it special is the park’s primary function of mitigating flooding for the community through its five detention basins.

The recreation and detention site, once the Clear Lake City Golf Course, has been part of the community for more than 50 years. With increased development in the surrounding area in recent years, the old methods of managing runoff — outdated drainage channels — didn’t hold up.

Residents several years ago took steps along with the local water agency, Clear Lake City Water Authority, as the community realized more drainage was needed. In 2005, when the golf course’s owner decided to sell it to residential and commercial developers, the Water Authority had heard enough concerns from residents and witnessed plenty of flooding in the area. The Water Authority began to consider the potential impact of converting the golf course into condos and townhouses.

After two hydrologists determined that the development would dramatically increase flooding in the area, the Water Authority purchased the land for $6.2 million in 2011 with the idea to convert the property into detention. The result is Exploration Green, a former golf-course-turned-park now being converted into a system of detention ponds to hold stormwater during major rainfall events. 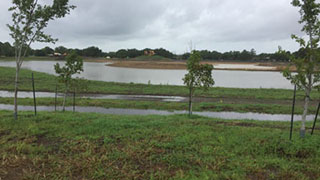