Design work is kicking off on the Upper Trinity Regional Water District’s  $490 million Lake Ralph Hall Conveyance System — including a brand new reservoir — one of largest water supply projects to be built in Texas in the last 30 years.

The district has selected Lockwood, Andrews & Newnam Inc. (LAN) as the prime general engineering consultant, along with CP&Y, Halff Associates and Plummer as sub-consultants.

Lake Ralph Hall, named after longtime congressman Ralph Hall from Rockwall, Texas, will be built in southeast Fannin County on the North Sulphur River. Once complete, the project will provide an additional 54 million gallons per day (MGD) of treated water for the residents of Denton, Collin and Fannin counties, the population of which is projected to increase nearly fivefold in the next 50 years, according to the water district.

The project includes an approximately 2.3-mile dam that will be named after former Ladonia Mayor Leon Hurse, and the lake itself will be about 16,000 acres, which is about the same size as Lake Grapevine, northwest of Dallas, says Jason Pierce, manager of governmental affairs with UTRWD. Water for the lake will be generated in the upper watershed of the North Sulphur River, he adds.

A project delivery method has yet to be determined, but it will be at least 18 months before a contractor is engaged for the conveyance system, says Justin Reeves, vice president with LAN. 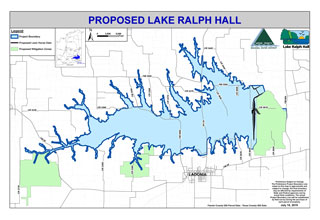