Built in the late 19th and early 20th centuries, the historic Hot Wells site on the San Antonio River was home to several versions of a health spa and resort that piped sulfurous water from a hot Edwards well. Famous celebrities including Charlie Chaplin, and Teddy Roosevelt flocked to the site for the water’s healing powers. The legendary hotel burned in 1925, and the bath house burned twice, in 1988 and 1997. But the remains of the bath house were still standing.

In October 2012, after several attempts to save the structure, Bexar County began a lengthy negotiation with land owners to obtain four acres surrounding the historic ruins. After obtaining the land in March 2017, the County made the decision to turn the site into its first-ever cultural park. Phase one of the revitalization efforts, which was completed in April 2019, involved stabilizing the existing structures, creating a park entrance and signage, building public bathrooms and extending utilities to the buildings.

Phase two will focus on turning the ruins into a community resource. It will include landscaping and transforming the old Hot Wells structures into public spaces. On the first floor of the old bathhouse, the County is planning a demonstration kitchen and herb garden, a mini museum with interpretive panels detailing the site’s past, a visitor center and gift shop.

The second floor will house a classroom and computer lab; and the third, a meeting room and offices. Trails throughout the park and trails connecting it to the Mission Reach of the San Antonio River, as well as outdoor rental spaces and the existing garden are also planned. Possible programming includes outdoor black and white movie screenings, a farmers market, yoga and art exhibitions.

“The grand opening marks the culmination of years of effort by Bexar County to repurpose this historic landmark,” said Justin Murray, P.E., LAN’s project manager who is overseeing the project. “It is an incredible feeling to see it rise from the ashes into a first-of-its-kind public park that everyone in San Antonio can celebrate and enjoy.”

Other firms involved in the project include Alamo Architects, Rialto Studio as the landscape architect, Raba Kistner as the environmental consultant, Davila Construction as the contractor, and other sub-consultants. 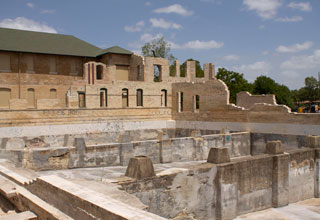