Any Houstonian who’s ever stalled out in a rush-hour gully washer, swatted mosquitoes on a humid summer afternoon or hauled soggy carpet to the curb after a neighborhood flash flood will be forgiven for thinking the supply of water is one thing they needn’t worry about.

Indeed, throughout the city’s first century, the settlers and entrepreneurs who settled here tapped into generous underground stores of water to flood rice fields or run refineries. In 1939, government scientists reassured residents the local water table should be fine even if average pumpage should reach 50 million gallons daily.

But the decades kept passing, the city kept growing and the wells kept multiplying. Officials watched the level of the water underground steadily drop as daily pumpage at times exceeded 450 million gallons. Regional aquifers were depleted as millions of people and businesses drilled ever deeper.

Subsidence problems were documented, and experts came to recognize the supply could not keep pace with demand.

Now, after decades of public meetings and engineering consultations, environmental-impact studies and design proposals, a solution is in the works on a massive scale: a $3 billion, three-part chain of infrastructure projects to carry water more than 40 miles westward from the Trinity River and provide a lifeline to the northern region and burgeoning suburbs from Spring to Tomball to Katy. 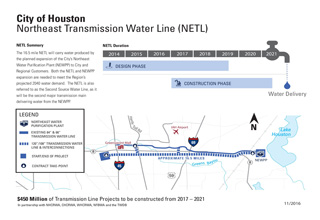