The MoPac Expressway intersections at Slaughter Lane and La Crosse Avenue in southwest Austin were originally constructed in 1992. Since that time, Austin’s population has nearly doubled, according to the U.S. Census. Average daily traffic on the MoPac Expressway, which was 21,000 in 2010, is projected to reach 66,700 by 2030.

As a result, the intersections at Slaughter Lane and La Crosse Avenue became congested over the years, creating operational problems, causing travel delays, and affecting access, safety and mobility. In 2013, the Central Texas Regional Mobility Authority and the Texas Department of Transportation (TxDOT) initiated an environmental study to analyze and determine options for reducing travel delay and enhancing safety at these intersections.

Following the study and public review, TxDOT decided to construct underpasses at Slaughter Lane and La Crosse Avenue and extend the MoPac main lanes under these two intersections. The MoPac main lanes, two in each direction and approximately two miles long, would be constructed inside the existing MoPac lanes. The existing Mopac lanes would be reconstructed and serve as ramps to carry main lane traffic to Slaughter Lane and La Crosse Avenue.

To implement these improvements, TxDOT selected Lockwood, Andrews & Newnam, Inc. (LAN), a national planning, engineering and program management firm, as the lead design engineer. Kimley-Horn and Associates, Inc. was selected as the traffic control plan and temporary signals sub-consultant, Cobb Fendley and Associates, Inc. as the illumination sub-consultant, and IDCUS, Inc. as the drainage, signing and striping sub-consultant. In August 2017, the project went to letting and Webber was awarded the contract as the low bid. 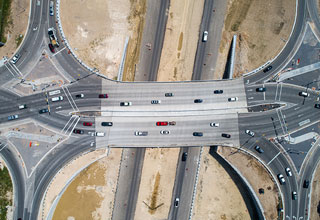