Northern California’s Santa Clara County might seem to have everything it needs, from the rolling hills and high-tech industries of Silicon Valley to the swaying palm trees that epitomize the laid-back West Coast lifestyle. But as the region’s population has grown over the years, the county has also experienced that common but undesirable side effect of success: increasing traffic congestion, especially along interstates 880 and 680.

To improve transportation in the greater San Francisco Bay Area, the Santa Clara Valley Transportation Authority and Bay Area Rapid Transit are extending heavy-rail passenger train service southward from Alameda County into Santa Clara County. Called the Silicon Valley Extension Program, the roughly north-south-oriented project will ultimately add 16 mi of new tracks and six new stations to the existing BART network, much of it between I-880 to the west and I-680 to the east. Although Santa Clara County is not part of the BART district, VTA has contracted with BART to operate and maintain the extension within Santa Clara County. VTA is funding and overseeing the construction of the extension’s infrastructure, which it will own. VTA also provides bus and light-rail service within the county.

The first phase of the project, known as the Berryessa extension, was completed during 2020 at a cost of $2.3 billion. It featured the design and construction of two new transit center stations and 10.2 mi of double-tracked rail line starting at BART’s existing Warm Springs station in the city of Fremont and ending in the Berryessa area north of San Jose. Approximately 6 mi of the new line is constructed in trenches, another 3 mi is at grade, and approximately 1 mi is supported on an elevated structure. Roughly half the distance runs parallel to an active Union Pacific Railroad line.

The project’s second phase will include an additional 6 mi of track and add four more stations in the cities of San Jose and Santa Clara. Phase II construction is expected to start in 2022, and the new line will not be completed until at least 2030, according to information on the VTA website.

The design-build Phase I project was constructed by a joint venture of Skanska USA Civil Inc., Shimmick Construction Co. Inc., and Herzog Contracting Corp. The engineering firm Lockwood, Andrews & Newnam Inc., a Leo A. Daly company, served as the lead designer in a joint venture with T.Y. Lin International. LAN’s scope of work included the track systems, stations, mechanical and electrical systems, and certain structures. TYLI’s work focused on the trench and elevated structures, retaining walls, a tunnel, and other structural systems. 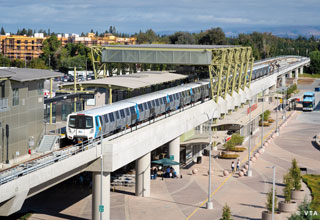