Tomball Independent School District has completed two of the biggest projects of its 2017 bond program just in time for the 2021-2022 school year.

The two projects were built on a greenfield site at Cypress Rosehill Road and the Grand Parkway. The projects are also part of the Elmer & Dorothy Beckendorf Educational Complex, which broke ground in May 2019.

The $37.29 million Tomball ISD Stadium, at 20235 Cypress Rosehill, is considered a multifunctional facility used for various athletics and fine arts, such as band. It includes Astro Turf Trionic Blend, which is typically used in collegiate-level turfs. It also includes a 600-person, two-level community facility, which spans 28,678 square feet, for district and community events.

The new stadium will also seat 10,000 and is one of the last projects of Tomball ISD’s 2017 bond. The project includes 3,000 parking spaces, a conference center, sports locker/dressing rooms, athletic training, kitchen and administration areas for sporting events. Additionally, the stadium has a 36-foot-by-52-foot Daktronics scoreboard, a one-level press box and monitors. The ribbon-cutting ceremony and convocation for the new Tomball ISD Stadium will be held on Aug. 9 at 8.30 a.m.

Although it was originally supposed to open last fall, the stadium project didn’t face any delays due to Covid-19, according to Robert Wilbanks, senior associate and program manager at Lockwood, Andrews & Newnam. LAN is the program manager on the bond projects. 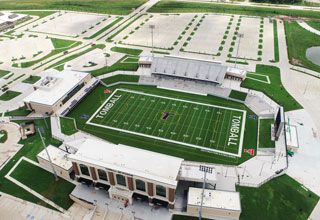