Less than four years ago, the golf course at the center of Clear Lake City, Texas, looked like any other suburban golf course, with vast tracts of meticulously manicured lawns stretched across 178 acres of rolling hills. Golf courses are one of the least sustainable uses of urban green space, and like any of the thousands of golf courses scattered throughout the U.S.—which make up a whopping 45% of golf courses worldwide—Clear Lake City’s required an inordinate amount of water for maintenance and upkeep. But today, the golf course is something else entirely: a glimpse at the future of climate change resilience.

With an ongoing, five-phase project called Exploration Green, Clear Lake City has begun to transform the former country club into a network of engineered, flood-detention ponds designed to accommodate an estimated half billion gallons of stormwater. Each of the ponds, which will undergo fine grading and erosion control, will act as giant, slow-draining landing basins to harness water and mitigate flooding to immediate areas.

The new systems will greatly expand upon the city’s preexisting drainage ditches, which have long proved insufficient for the town’s explosion of development and growth in recent decades, and overwhelmed communities downstream during heavy rainfalls. Working to accommodate water rather than blockade it, Clear Lake City’s residents are embracing a strategy of learning to live with nature—a tactic that the Dutch have been known to practice to great success. When completed, the Clear Lake City Water Authority (CLCWA) will have essentially retrofitted the city’s existing landscape to withstand a 100-year storm event. 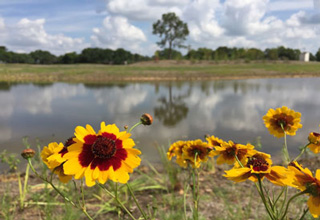