By Christine Kirby and Ram Chakradhar

With an astounding 21.6-percent population growth over the last decade, the greater Houston region is expected to double in population by 2050. To meet future demands, and in response to the Harris-Galveston Subsidence District mandate to reduce groundwater pumping along the Texas coastal region, Houston Public Works partnered with regional water authorities to build the Northeast Transmission Line (NETL).

The eastern 108-inch waterline projects were constructed using primarily open-cut methods within an existing 90-foot-wide waterline easement, which already contained a parallel 84-inch-diameter waterline. This steel, tape-coated waterline was built in 2004, and a stub-out with butterfly valve was installed near the busy intersection of Beltway 8 and Wilson Road.

The interconnection between the 108-inch and existing 84-inch waterline was an integral part of the project to secure reliable isolation for future maintenance. With not a lot of room, heavy traffic and big businesses in the vicinity, the ambitious interconnection took a lot of research, planning, innovation and coordination, during design and construction, to make it a reality. 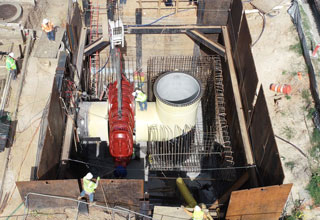