In early 2017, deterioration and storm damage caused by Hurricane Ike drove the city of Galveston, Texas, to rehabilitate its Airport Wastewater Treatment Plant (WWTP). The city contracted Lockwood, Andrews and Newnam Inc. (LAN), a national planning, engineering and program management firm, to perform the preliminary and final design for this rehabilitation, which would also expand the plant’s capacity from 3.75 million gallons per day (mgd) to 4.76 mgd. In addition to lift station, aeration basin, clarifier and disinfection improvements, a main component of this rehabilitation was to improve the sludge processing at the plant.

The sludge processing system at the Airport WWTP originally consisted of a 65-foot diameter concrete basin that utilized three blowers located on a concrete pad adjacent to the basin and a coarse-bubble diffuser system to provide aeration and mixing.

This system accomplished partial digestion before the sludge was wet hauled to the city’s Main WWTP to complete the sludge processing. In 2008, the plant sustained significant damage from Hurricane Ike, including the destruction of the existing digester blowers. As an intermediate solution, the city utilized a vertical splash aerator, consisting of a motorized vertical mixing blade suspended from a concrete walkway above the basin, to provide aeration and mixing in the digester. But this method provided inefficient aeration and agitation of hydrogen sulfide gasses, which caused corrosion to much of this structure including the concrete walkway above the digester. 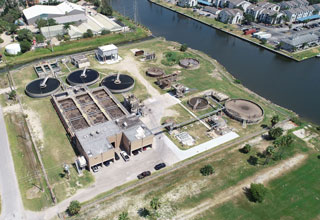