Initially identified in the early 1990s as an area to redevelop under a master thoroughfare plan, a critical intersection in Sugar Land, Texas, is finally being transformed. Teams led by two different general contractors on the University Boulevard North Extension project are orchestrating work around a handful of major stakeholders, while also facing poor soil conditions that challenged engineers and constructors on critical segments.

The project is a four-lane, divided, north-south connector that extends University Boulevard north from the US 90A intersection along the west edge of the business campus of Nalco Champion, a supplier to the oil and gas industry. A new bridge will carry the route over Oyster Creek and a Union Pacific Railroad (UPRR) spur before finally merging with Stadium Drive, which runs along the city’s newly built baseball park, Constellation Field.

“This road segment is a key connection from the north side of town across the railroad tracks to the south side of town and actually transitions to University Boulevard south of US 90A, which continues all the way around and acts as a bypass around the State Highway 6 corridor,” explains Christopher Steubing, city engineer with the city of Sugar Land, the project owner.

The roadway will improve access from north Sugar Land to south of US 90A while also providing an alternate route to alleviate traffic congestion.

Development of the surrounding area, including the start of Constellation Field’s construction in 2011, further propelled the city to move forward on the extension. But first the city had to satisfy the needs of the affected stakeholders—the Texas Dept. of Transportation (TxDOT), UPRR, Johnson Development and Nalco Champion.

“It would close Nalco’s private drive and one other public crossing. We also have a development agreement with Nalco, which now has two new driveways off the new segment of roadway and a brand new five story office building right off it, where they’ve moved 1,200 jobs into the community.”

Following negotiations with various entities, the city and engineer-of-record Lockwood, Andrews & Newnam Inc. (LAN) began design and preliminary engineering in 2014. Construction on the road segment started in September 2015, the rail section in May 2016 and the bridge segment in January. 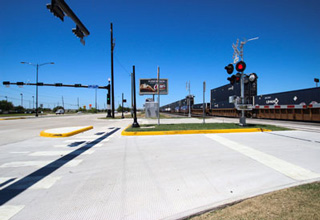