By Paul Wood and Becca Hall

The O.N. Stevens pump station in Corpus Christi, Texas, was originally designed in the mid-1950s. The pump station is configured with the two pump buildings connected to two common discharge lines.

First, the placements of the pump intakes were more than 13 feet away from the back wall. Second, the pump bays flared out from the approach channel after the screens. Third, the bays for the two pumps on the north were not symmetrical about their intake channel. This situation was mirrored on the south. As a result, the vertical turbine pumps in the pump station suffered from operating issues and impaired service life.

As part of a team working on providing additional water supply capacity for Corpus Christi, a national engineering firm was contracted to evaluate the existing pipeline hydraulic capacity of transfer lines from the O.N. Stevens pump station to the treatment plant. In addition, the firm was chosen to select pumps that would provide the desired capacity when both pump building 1 and pump building 2 were operating.

When the team originally visited the existing building No. 1, only one pump was installed. The project team was informed that the pumps in this building had always had problems. Through cursory observations, it was immediately obvious that the intake design of pump building 1 did not meet today’s design standards and contributed to the pump failures that had plagued this installation. 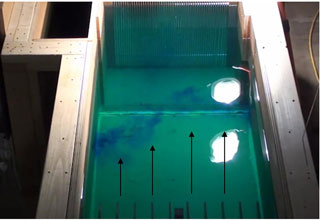